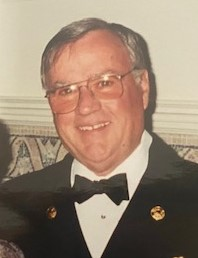 Donald William McNeill of Boonton, NJ, formerly of Mountain Lakes, passed away Monday, April 18, 2022. He was 83.

Donald was born in Hillside, NJ to Alfred and Mary Ellen (Byrne) McNeill in 1938. He graduated from with a bachelor’s degree from Newark College of Engineering (NJIT). Donald joined the U.S. Army and was a trained medic. He owned Lafayette Crane & Hoist of Newark for 40 years.

Donald was a 42-year member of the Mountain Lakes Fire Department as well as a past chief. He was a parishioner of Our Lady of Mount Carmel and St. Catherine of Siena churches and was a choir member for both. Donald loved antique cars – he was a member of the Ford Model A Club and his latest car was a 1930 Model A. He enjoyed golfing at Rockaway River Country Club and daily Manhattans. Donald loved watching Jeopardy.

Donald met his wife, Mary Ann Ingate at the Big Top Car Hop in Union in 1960. They celebrated 46 years of marriage before she passed in 2008.

Predeceased by his beloved wife, Mary Ann; his parents and his brother, Alfred McNeill; Donald is survived by his daughter, Nancy Haberman and her husband, David; his son, Geoffrey McNeill; his grandchildren, Sean, Brian and Kelli McNeill; David Jr., Sydney and Skylar Haberman as well as many nieces, nephews and friends.

Visitation will be Saturday, April 23rd from 10:00 to 12:00pm at Codey & Mackey Funeral Home of Boonton. Interment will follow at St. Gertrude’s Cemetery in Colonia.

In lieu of flowers, donations to the Mountain Lakes Volunteer Fire Department or the American Cancer Society in his memory would be appreciated.

Share Your Memory of
Donald
Upload Your Memory View All Memories
Be the first to upload a memory!
Share A Memory
Send Flowers
Plant a Tree