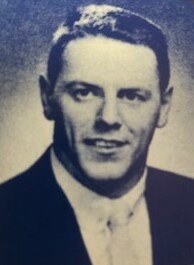 James Patrick “Jim” Ward, 88, passed away at home in the care of his loving family. A native of Wilkes-Barre, Pennsylvania he attended Coughlin High School where he first began wrestling. He enlisted in the Naval Reserves after graduation. The first in his family to go to college, he enrolled in Wilkes College as an education major. While at Wilkes he was called to active duty during the Korean Conflict. He met fellow Wilkes student, Marilyn Davis, and they cemented their partnership through marriage in 1958 after their graduation. They made quite a team that inspired their entire family. He went on to earn a master’s degree in probability and statistics from Montclair State College.

Jim distinguished himself as a grappler at Wilkes where his dual meet win percentage still stands as 4th highest in the program’s history.  He was the first Wilkes wrestler to have an undefeated dual meet record, which he repeated the next season as team captain. He was key in the Colonels winning their first two Middle Atlantic Conference championships and won the MAC individual crown at 137 pounds.  Jim was inducted into the Wilkes University Athletics Hall of Fame in 2000.

After a stint at Scotch Plains, Jim joined the staff at Morristown High School where he taught math for more than 30 years. He devoted himself to teaching and mentoring MHS students. Together with Joe Dempsey, he was a driving force in creating the MHS Academic Advancement Program that encouraged students to work toward academic success and graduation.

After being an assistant, he was the head wrestling coach at MHS from 1963-1972. He coached Renard Haskins to state titles in 1969 and 1970. This was followed by many distinguished years as a high school wrestling official. He also refereed high school soccer, umpired baseball, and officiated at cross-country meets while devoting countless hours to supporting his daughters and, later, grandchildren in their sports (and all other) endeavors.

Jim worked for his colleagues in the Morris School District, negotiating contracts for years and as an active association member and officer, including 5 years as President. He faithfully attended NJEA and NEA conventions, famously founding the Beer Caucus. Under his leadership the Beer Caucus raised funds for the NJEA/NEA Employee Rights Fund for a long time. He further shared his time and talents for the benefit of his retired colleagues through MCREA and NJREA.

In 1961, Jim and Marilyn moved to Boonton where they happily stayed to raise their family and be involved in the community. Jim was on the Board of Adjustment, drove for Meals on Wheels, volunteered at the First Presbyterian Church, went door-to-door for the American Heart Association, donated blood, picked up litter, and helped out wherever and whenever he could. He was always there to lend a hand to family, friends, and anyone else. Social justice was a lifelong pursuit and no person cared more about “doing the right thing” and working to make the world a more fair, better place.

A proud Irishman, Jim was predeceased by his parents, Joseph and Veronica “Vera” (Kelly) Ward; his brother, Joe; his sisters, Maureen and Peggy Lou Saraka.  Jim was a rock who made life special and, best of all, made everyone laugh.  Here to cherish the memories are his wife of 63 years, Marilyn Ward; his daughters, Megan Ward and her husband Kevin Kelly of Hampton Twp. NJ; Elizabeth Ward-Hettrich and her husband, Mark Hettrich of Boonton; and Connie Ward of Long Valley NJ; “Guy” to his grandchildren (and their friends) Colin Ward Schaub and his spouse, Chelsea Schaub; Benjamin Ward Schaub; Jacob Ward Hettrich and his spouse, Ruadhan Hettrich and great-granddaughter Ruairi Hettrich; Abigail Ward Hettrich; Luke Ward Hettrich; Margaret Ward Hance and William Ward Hance; other dear family members and legions of friends.

There will be a memorial service at 1:00 pm on Saturday, March 19th at the First Presbyterian Church of Boonton, 513 Birch St., Boonton NJ. For those unable to attend the repast there will be a time to visit with the family from 11:30 am -1:00 pm at the church. All others are invited to visit with the family afterward at the repast. Burial will be private. Donations to Loaves and Fishes Community Food Pantry or Alzheimer’s Association are invited in lieu of floral tributes.