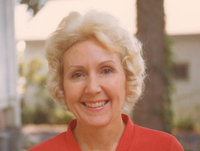 Ellen Jean (Brabnac) Kayhart passed away at the age of 94 at the Boonton Care Center on June 5, after a long battle with Alzheimer's disease and more recently, coronavirus. She was predeceased in 2011 by her husband, Arthur Kayhart, and is survived by her daughter, Anita Brennan and husband Herb, and her son, Wayne, and his wife, Teresa. Ellen was born at home in Parsippany, NJ to Renee Smythe Brabnac and Eugene Brabnac in 1926. She grew up during the Great Depression. While her family did not have a lot of money, there was a lot of love. As a child she had a very close extended family of many aunts, uncles, great-aunts, cousins and grandparents. Ellen and her parents later relocated to Boonton, where she resided for nearly 90 years. After graduating from Boonton High School, Ellen was employed by the Purchasing Department of E. F. Drew in Boonton. She would walk the mile back and forth from her home to work each day. It was during that time that she met her future husband, Arthur. The plumbing shop where he worked was on her route. They first began exchanging "hellos" when she walked past, and one thing led to another. They soon became engaged and married shortly after. Ellen enjoyed doing projects around her house, working in her gardens, and traveling both in the U.S. and abroad with her husband and friends. She volunteered as the Publicity Chairperson for the Boonton PTA for several years and, was a member of the Boontonites, and the Boonton Twp. Garden Club. She loved animals, and was always ready to take in another stray cat. At one point, there were six cats and a dog in the house. She also enjoyed family time and spending the holidays with her husband, children and parents. She lived the last 4 years of her life at the Boonton Care Center, where she was able to participate in many of the activities until recently. Due to coronavirus restrictions, on Wednesday, June 10th a private visitation will be held at the Codey-Mackey Funeral Home in Boonton. Immediately followed by a private family graveside service and burial at Greenwood Cemetery in Boonton.