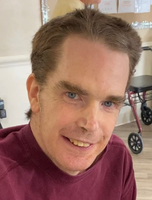 Matthew Byrne Baxter, age 49, died January 24, 2020 from pancreatic cancer. Matthew was a beloved son of George and Mary Pat Baxter of Boonton Township; beloved brother to five siblings and beloved uncle to sixteen nieces and nephews: Jane (Mark) Bayne and Colin, Emmet and Matthew; Andrew (Joi) Baxter and Keira and Derek; George (Nicky) Baxter and George, Charlotte, Elizabeth and Margaret; Michael (Nancy) Baxter and Lillian, James and Elena; Dan (Erin) Baxter and Graham, Liam, Everett and baby brother on the way. Matthew was born in Hartford CT in 1971, and attended several schools and special education programs. Matthew spent 28 years living, learning and working in several Camphill Village Communities for people with special needs. He lived in Villages in Pennsylvania, New York and Massachusetts. He also participated in two exchange programs, spending several months in Camphill Villages in Northern Ireland and Ontario, Canada. Matthew performed on stage at Carnegie Hall and Avery Fisher Hall at Lincoln Center with the Camphill Village Bell Choir. He also performed in starring roles in local community theater in Great Barrington, NY. Over the years Matthew has been a student, apprentice, weaver, gardener, ostler and swineherd. He has dabbled in German and in American Sign Language. Although he never married, he eloped several times. He had an unerring sense of direction and flair for the dramatic. Matthew made friends wherever he went and never failed to make an impression. While quite tenderhearted, he had an acerbic wit. The world is a duller place without him. His malapropisms were legendary, even in German: "Immanous" gleiche. Our Lord is good, and we are grateful for many things, one being that one of the few care facilities that caters to people with developmental disabilities and cognitive impairment is located right in Lincoln Park, so we could visit him often. (Mom twice a day.) Another is that he was able to receive Last Rites and an Apostolic Blessing the day he died, as well as several other times in the last few months. He had visits with Fr. Marsolle, then Fr. Powers on Wednesdays for the past few months. Matthew has been beautifully cared for, body and soul. Following his recovery from major surgery last March, he had a truly blessed 7 or 8 months. While he was never able to walk again, he could eat solid food, become a part of the community around him, and offer many observations on life and the passing scene. Often astute, usually hilarious. We were all gifted this time to be with him, love him, laugh with him, and benefit from his countless examples of patience and resignation in hardship. Visitation will be on Tuesday, January 28 from 4-8 pm at Codey & Mackey Funeral Home, 107 Essex Avenue in Boonton, NJ. A Requiem Mass will be at 10 am, Wednesday January 29, at Our Lady of Fatima Chapel, 32 W. Franklin Ave., Pequannock, NJ.