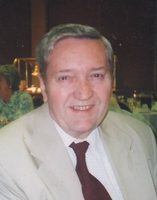 WALTER HANS KUHN Walter was a long time resident of Boonton, who passed away on Sunday, November 17, 2019. Walter was born on December 17, 1931 in Waldenburg, Germany and immigrated to the United States in 1952. He was drafted into the US Army and served during the Korean War with the military police. After his service, he worked in construction as a mason. In 1955, he began working for Air Craft Radio Corporation until 1970, and then was employed as a maintenance mechanic at Riverside and Saint Claire's hospitals retiring in 1997. Walter was a member of the First Reformed Church of Boonton and served as an Elder and sang in the choir. In his free time, he enjoyed wood working and painting. He is survived by his wife Joan Kuhn (Van Dyke), who he was married to for 63 years, a son, John W. Kuhn (Nancy Hagemann), a daughter, Doris A. Yanez (Juan), a brother, Fred Kuhn (Nancy Price), a sister, Marianne Keller and four grandchildren. Visitation will be in the Codey & Mackey Funeral Home, 107 Essex Avenue, Boonton, NJ on Thursday, November 21st from 2-4 & 6-8 pm. A Service will be held on Friday at 10:00 am in the funeral home followed by the interment at Greenwood Cemetery in Boonton. Please visit codeymackeyfh.com to share a condolence or a memory with the family. In lieu of flowers, please make a donation to The First Reformed Church Food pantry or Boonton Kiwanis First Aid Squad.