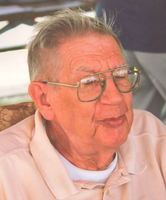 Edward Steven Fody, formerly of Boonton, NJ and Gardner, NY, passed away peacefully on August 10, 2019, two days after his 89th birthday in Highlands, New Jersey. He was the son of Steve and Anna (Koch) Fody and had one brother, the late Theodore Fody. He grew up in Queens, New York. As an adult, Ed proudly served in the US Navy. After his service, he graduated from Fordham University with a law degree. Realizing he had a love for teaching, he become a professor at Caldwell University. For the next 14 years, he taught history and political science, eventually became Chairman of the History and Political Science Department. Ed also taught part time at Montclair State University. And in his spare time, he wrote scholarly articles. Ed left teaching in 1974 and went into law full time. Along with practicing law, he produced his own radio show that aired in the Hudson Valley. He called the show "Meet the CEO!" and each week he would interview a CEO from various companies. Ed was a huge Yankee fan and stuck with them through winning and losing seasons. In 1955, He met Ann Marie Shannon in New York City. It was love at first sight and they were happily married for 62 years. In addition to his wife, Ed leaves behind his three beloved children and their spouses, Debbie and husband Dr. Steven Wolinsky, Sheryl and husband Ray Marszalowicz, and Edward and wife Lisa Fody. Ed's greatest joy in his later life were his 8 grandchildren Christina Park, Towney Godfrey, Billy Godfrey, Andy Godfrey, Katie Dondero, Steven Dondero, Christopher Fody, and Samantha Fody and his 5 great grandchildren, Gregory and Ginny Dondero, Henry and Charlie Park, and Olivia Godfrey. He arranged vacations at the Outerbanks of North Carolina in the summer and at Thanksgiving so he and Ann could spend time with their grandchildren and later their great grandchildren. They all knew that they could talk to grandpa about anything and he kept all of their secrets. And when he had great grandchildren, he sent them books, toys and magazine subscriptions on topics in which they were interested such as trucks and dinosaurs. Ed was the beloved patriarch of our family. With his passing, he leaves a big hole in our lives but we will always remember him in our hearts. The visitation is on Friday, August 16th from 5-8 pm at the Codey & Mackey Funeral Home, 107 Essex Avenue, Boonton, NJ. The Funeral Mass take place on Saturday, August 17th at 10:00 am in St. Pius X Church, 24 Changebridge Road, Montville, NJ and the interment will follow at Greenwood Cemetery in Boonton.